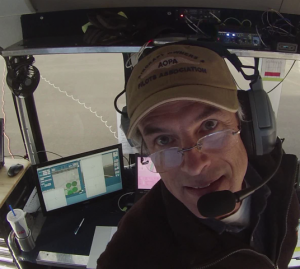 Tad McGeer is Aerovel’s founder and president.  He trained as an aeronautical engineer at Princeton and Stanford, and then joined the new Engineering Science faculty at Simon Fraser University in his native British Columbia.  There he developed the concept of passive dynamic walking, which went on to be adopted as a paradigm for study of human locomotion and design of legged robots.  In 1990 he returned to aeronautics, joining a Virginia start-up, Aurora Flight Sciences, as Chief Scientist.  He headed early design studies on the Perseus and Theseus unmanned research aircraft, and then proposed the Aerosonde miniature aircraft concept for long-range weather reconnaissance.  This led to founding of the The Insitu Group, beginning in a Silicon Valley garage in 1992, and moving to the Columbia River Gorge in 1994.  Insitu pioneered development of miniature robotic aircraft in worldwide trials, under conditions ranging from arctic winter to severe tropical thunderstorms.  Aerosondes made the first unmanned Atlantic crossing (1998), first unmanned typhoon reconnaissance (2001), and first unmanned eye penetrations into tropical cyclones (2005).  In 2000, Dr McGeer began design of the Seascan miniature aircraft for long-endurance imaging reconnaissance.  Seascan made the longest-ever flight for a ship-based aircraft in 2004, while the GeoRanger variant made the first unmanned geomagnetic surveys, and the Scaneagle military variant was adopted by the US Marines and Navy.  Dr McGeer directed Insitu’s engineering program for more than 10 years, with particular responsibility for conceptual and configuration design, performance, dynamics and control, avionics, algorithms, simulation, and onboard and ground software.  During his tenure the company grew to more than 100 employees and more than $20M/year in revenue, with recognition as one of the fastest-growing technology firms in North America.  The company went on to be bought by Boeing in 2008 for a reported $400M, and has become the largest employer in the Columbia Gorge.  Two further companies, Aerosonde Pty Ltd and Cloud Cap Technologies, were meanwhile started by Insitu technology and alumni. In 2006 Dr McGeer himself joined with his Stanford classmate and Insitu co-founder Andy von Flotow to start Aerovel for development of the Flexrotor concept.  He continues to serve as an affiliate faculty member in Aeronautics & Astronautics at the University of Washington, and as founder and committee chair for the W Prize.