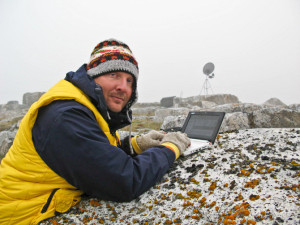 Marko Peljhan is a researcher, a conceptual/systems artist and co-founder and CEO of C-ASTRAL, a vertically integrated unmanned systems solutions provider based in Slovenia. From 1994 on he has been coordinating the Makrolab global habitat art, engineering and science project devoted to the understanding of complex connections between Climate,    Migrations, Telecommunications and Networks.  He is also the co-founder of the Ljudmila digital media lab (1995) and the initiatives I-TASC (Interpolar Transnational Arts Science Constellation – International Polar Year project 417) and the API – Arctic Perspective Initiative with Matthew Biederman, devoted to research at the Earth’s poles.  Peljhan is responsible for unmanned systems research, starting in 1999, that led to the first unmanned vehicle developments in Slovenia with the SPECTRAL-SYSTEM UAS. From 2002 on he works as Professor of interdisciplinary studies at the University of California Santa Barbara and serves also as the international coordinator for the Slovenian Space Sciences Centre of Excellence SPACE-SI, where he is currently part of the team that is developing and fielding an advanced interactive guidance small  (70kg) earth observation satellite in collaboration with UTIAS Toronto.  In the radio spectrum he is known as S54MX. He has been waiting for Software Defined Radios for a long time, but now they arefinally here. His main current interests lay in Systemics.