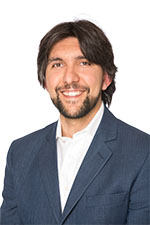 Lorenzo Martelletti is Director of Sales and Marketing at Pix4D, which he joined in 2012 during the company’s early stage. The company has seen exponential growth and is currently an industry leader in the UAV-photogrammetry software sector.

Lorenzo coordinates sales, marketing and business development activities at Pix4D’s headquarters in Lausanne, Switzerland, as well as the company’s San Francisco and Shanghai offices. He earned his Master’s and Bachelor’s degrees in environmental engineering at University of Florence (Italy), and studied Technology Entrepreneurship at Santa Clara University (U.S.) with a Fulbright BEST (Business Exchange and Student Training) scholarship.

Lorenzo previously worked as scientific collaborator in geomatics at EPFL (Switzerland), as a research intern in remote sensing of vegetation at NASA Ames Research Center (US) and as a researcher in near-surface geophysics at University of Florence (Italy). In the private sector, he has worked as consultant in international projects in geophysical and hydrographical surveying as well as agroforestry and has co-founded two companies in Italy in the IT and Carbon Forestry sectors.