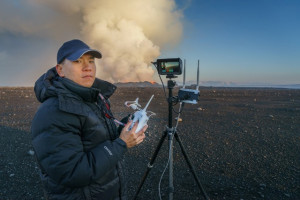 Eric Cheng is DJI’s Director of Aerial Imaging, and is responsible for DJI’s San Francisco office . Throughout his career, Cheng has straddled his passion for photography, entrepreneurship, technology and communication. An award-winning photographer in underwater, terrestrial and aerial domains, he also runs Skypixel.org, an informative blog focused on aerial camera technology, and Wetpixel.com, the leading underwater photography community on the web. His work as an aerial imager has been featured in Wired, Outdoor Photographer, Popular Photography, Washington Post, Wall Street Journal, Make, Photography Week, ABC, CBS, CNN and other outlets.

Cheng previously worked as Director of Photography for Lytro, where he was responsible for bridging the gap between light field camera technology and the general public. Cheng earned his Master’s and Bachelor’s degrees in Computer Science at Stanford University. He is also an accomplished diver and cellist.