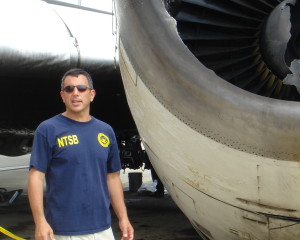 Mr. English is an Investigator-in-Charge in the Major Investigations Division of the Office of Aviation Safety.  He has been with the NTSB since 1999, in the Operational Factors Division, and became an IIC in 2004.  He has been the IIC on numerous major aviation accidents in the US including the Continental Airlines 1404 accident in Denver, Southwest 1919 in Chicago, a US Navy contracted B707, and most recently the Asiana Boeing 777 in San Francisco. He has served as the United States Accredited Representative on investigations worldwide including the B737/Legacy midair collision in Brazil and the B747 cargo fire in Dubai, as well as many others.  Mr. English serves as the NTSB’s resource for unmanned aircraft investigations – he has built and flown his own small multi-rotor system, and trained on numerous platforms up to the MQ-9.  He developed the NTSB’s civil unmanned aircraft accident regulations and investigations manual.  He worked for the FAA for 13 years as a controller and quality assurance specialist, and in the development of GPS navigation procedures.  He is a certified instrument flight instructor and commercial pilot in single and multi-engine airplanes, flew aerial observation, corporate, and electronics test aircraft and has extensive experience in flight inspection and advanced navigation technology.  Prior to joining the Board he was a contributing editor to IFR Magazine. Mr. English holds degrees in Aeronautical Science from Embry-Riddle University, in Geospatial Intelligence from Penn State, and graduated from the USAF Mishap Investigation Course.